Welcome and thank you for your interest in Candy Crocker School Of Dance.  In business since 1977, we are proud to be known as a "Tyler Tradition." Whether you are a beginner or an aspiring professional, our studio is sure to offer a class you will enjoy.  Thank you for choosing Candy Crocker School of Dance, and let us know what we can do to make your dance experience "Fabulous!"

Candy Crocker Jordan first opened the doors in 1977. The studio was located on The Old Troup Highway, and the new studio, located at 9914 County Road 2331 just off Highway 110, was built in 1983, and has become a home away from home for so many young dancers. 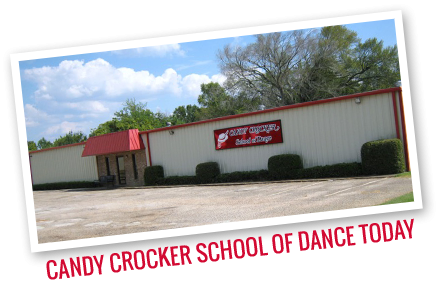 In 1980 The Candy Dancers were formed from a small group, eager to learn and anxious to excel. Many of our dancers have continued to study and perform on Broadway in New York, in Nashville, and Las Vegas. They have become Tyler Junior College Apache Belles, and Kilgore College Rangerettes, Officers, and Captains. They are members of Texas Tech University, University Of Texas, North Texas, and Stephen F. Austin Pom Squads, and The Dallas Cowboys Cheerleaders. Many of them are now dance teachers and own their own studios. Our biggest compliment is that many of our current students are second generation Candy Crocker Dancers. 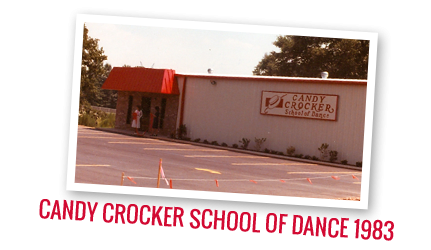 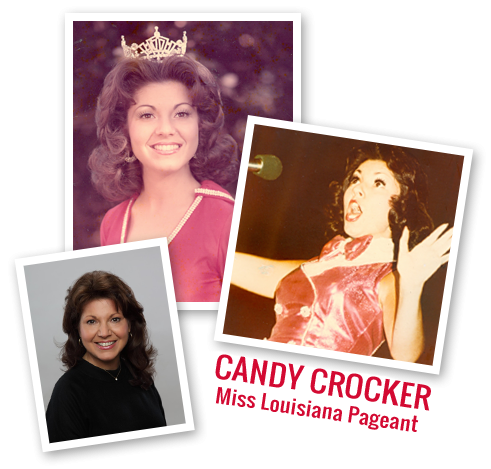 Candy Crocker Jordan has studied dance her entire life beginning in Woodbridge, England. She was proud to be named The World’s Ideal Miss, Miss Tyler, and Miss Louisiana. One of her most memorable performances was on the stage in “Atlantic City” at “The Miss America Pageant”. She graduated from Tyler Junior College and Southeastern Louisiana University with a degree in Education. She was on the Dance Faculty at Tyler Junior College for 25 years, and choreographed numerous musicals. She served as choreographer for the “Harmony And Understanding” pop group, guest choreographer for the Nationally Famous Apache Belles, and received many choreography awards.

Candy teaches not only dance steps but also performance skills and life lessons. Her students have been recognized in National Dance Competitions, and have received dance scholarships and overall awards. One of her greatest joys is seeing her students perform on the stage.

Thereza Bryce-Cotes began dancing at age 9, and was soloist with the Lake Charles Civic Ballet under the direction of Lady Leah LaFargue. At age 16 she received a full scholarship to study dance at SMU with Nakita Talin. Thereza attended LSU and was principal soloist with the Baton Rouge Ballet Theatre under Elissa Fuchs (formerly with Ballet Russe de Monte Carlo), and performed roles in Don Quixote, Sleeping Beauty, Swan Lake, Giselle, and Capriccio Italian.
Thereza danced with the National Ballet of Lima, Peru, and later moved to Tyler where she was co-director of The Dance Factory for 23 years. She studies and trains during the summer months with The San Francisco Dance Center under Kahz Zmuda, and In New York at Broadway Dance Center.
Thereza has been teaching both classical ballet and pointe at Candy Crocker School of Dance for 10+ Seasons. Her focus and consistent teaching style continue to produce only the most disciplined and elegant ballet dancers.

A choreographer, dancer and teacher whose style and presentation make a winning combination. Dana is a former captain of the Robert E. Lee Drill team; a recipient of The Tremaine Dance Scholarship; and a Semi-Finalist for Miss Texas Drill Team. She has been a teacher at dance workshops across the state, as well as a dancer, judge and choreographer at various dance, drill team and cheerleader workshops and competitions. Dana's award winning choreography has been showcased by the Drill Teams of Kilgore College, Tyler Junior College and Stephen F. Austin as well as Robert E. Lee, John Tyler, Bullard, and Whitehouse High Schools. She has been a guest teacher for the Macy's Thanksgiving Day Parade. She is inspiring, dynamic and extremely talented.

Sarah is a Tyler native and began dancing at Candy Crocker School of Dance as a little girl where she trained in all genres of dance including jazz, hip-hop, tap, and ballet. After graduating and spending time in the Dallas area, she is pleased to be back in East Texas teaching at her childhood “home away from home” and sharing her love for dance with her students. While in Dallas, Sarah graced the sidelines of Texas Stadium as a Dallas Cowboys Cheerleader, performing at numerous Cowboy halftimes and with entertainers Destiny’s Child and Kelly Clarkson. Her motivating and passionate teaching style continuously energizes her classes and builds confidence in all her students. While she isn’t dancing, you can find her helping those in the community buy and sell homes as a highly successful Realtor at RealEdge Real Estate in the Tyler and surrounding areas. She additionally enjoys spending time with her husband PJ, two dogs, her friends and her family. Sarah is thrilled to begin her 3rd year instructing hip-hop at Candy Crocker School of Dance and can’t wait to work with your dancers!

Lara has been involved in the dance and drill team world for most of her life. She graduated from Robert E. High School where she was an officer for the Southern Belle Drill Team, and also participated in studio dance throughout high school. After graduating, Lara continued to pursue dance at Kilgore College where she was a Rangerette, serving as a Swingster and Lieutenant. She graduated from The University of Texas at Austin with a degree in Kinesiology, and was a member of Texas Pom Squad. Lara was the Assistant Director for the James Bowie High School Silver Star Drill Team for 4 years, and then moved back to Tyler to become the Director of the Robert E. Lee High School Southern Belle Drill Team for 4 years. She continued to teach dance levels 1-4 at Robert E. Lee for seven years while also serving as the Fine Arts Department Chair. Lara has become increasingly involved with the Tyler Lee Theater Department, choreographing their musicals for the past five years including the Wizard of Oz, Beauty and the Beast, The Sound of Music, Once Upon a Mattress, and Oklahoma. Lara has choreographed for high school dance teams in Texas, Oklahoma, Arkansas, and Kansas, as well as for the Macy’s Thanksgiving Parade, Cotton Bowl, the Miss Texas Scholarship Pageant, the Chicago Thanksgiving Parade, and consistently for Rangerette Revels.

Hannah Bunn, originally from Beaumont, TX, has been dancing since age 4.  She was a member of the Beaumont Ballet Theatre dance company from 2005-2007 as a company member.  While training, she studied ballet, jazz, modern, and tap. In 2007 Hannah relocated to the Tyler area and joined the School of Ballet Tyler under the primary ballet instruction of Thereza Bryce-Cotes.  After Ballet Tyler she transferred to Tyler Junior College where she was awarded a dance scholarship and is currently working towards an Associate of Dance degree.

Most recently, Hannah was awarded a dance scholarship and trained under Carolyn Hanna from the Julliard School in New York in both ballet and modern dance.  She has continued to train with Thereza Bryce-Cotes and Shurrell Wiebe, former professional dancers and highly respected professors of dance at TJC.  Ms. Bunn has additionally trained with Willie Kirven, Broadway performer, and Carlos Dos Santos, dancer and instructor with Alvin Ailey American Dance Theater.  Teaching has been her passion for as long as she can remember and she says there is nothing in the world better!  Hannah is excited to be instructing for the second year at Candy Crocker School of Dance.

The ultimate passion for the art of dance and for teaching has always brought Vandy back to the dance world. She began her career at age three at her mother’s dance studio, Candy Crocker School of Dance, where she trained in tap, jazz, ballet, lyrical, hip-hop, drill team and musical theatre. Vandy attended Texas Tech University in Lubbock, TX and was a member of the Texas Tech Pom Squad. During her college career, she was awarded a summer internship at the prestigious, Broadway Dance Center in New York City, NY where she assisted with “The Rockette Experience” and trained with tap icons Savion Glover and Mike Minery. After receiving a Bachelor of Business Administration in Marketing, she relocated to Dallas where she was a Dallas Cowboys Cheerleader from 2002-2005. Her performance credits include two Christmas Tours with the United Service Organizations (USO) in South Korea, Alan Jackson’s “Live at Texas Stadium Tour”, “Fox and Friends” NYC, “The Tonight Show” with David Letterman, Fort Hood’s “Welcome Home Troops” with Jessica Simpson, and “Larry King Live”. Vandy has instructed and choreographed for the past 20 years for youth dance groups and cheerleading teams. Her enthusiastic and constructive teaching style stems from her love of dance and her desire to pass it on to the dancers of tomorrow.